Migraine: In ayurveda most of the conditions characterized by headache are referred to as “shiroroga”. Barring few symptoms like vomiting, double vision (diplopia), tremors in the region above shoulders, earache etc. other systemic symptoms like fever, convulsions etc. are absent. According to Sushrutucharya and Bhavaprakashkar there are 11 types of shiroroga viz. 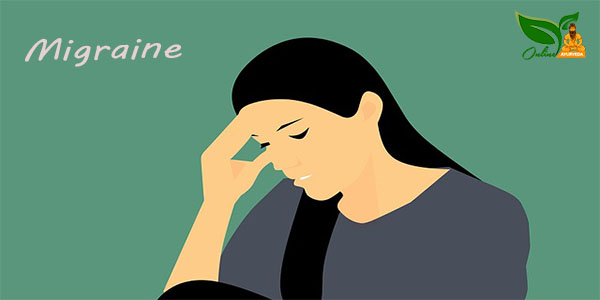 Of the above-mentioned shiroroga, Ardhavabhedak, which literally means unilateral pain, resembles migraine or hemicrania.
According to modern medical texts migraine is defined as a familial disorder characterized by recurrent attacks of headache widely variable in intensity, frequency, and duration. Attacks are frequently associated with loss of appetite, nausea and vomiting. This disorder called migraine is classified into following-
Classical migraine: In this headache is preceded or accompanied by mood and neurological disturbances like visual, sensory or speech disturbances.
Non-classical or common migraine: In this only headache is present and other symptoms of classical migraine are absent.
Complicated migraine: In this, the neurological headache is followed by lasting symptoms of neurological disturbances.
They have also recognized semantics like facial migraine (lower half headache), ophthalmic migraine, aphasic and hemi sensory migraine.

A variant of the migraine is cluster headache. In cluster headache the pain is severe, unilateral and occurs near the orbit of the eye and temple and lasts between 30-120 minutes. It is commonly associated with the redness and watering of eye, blockage of nostrils, occurs one to three times daily and frequently at night.

Migraine is believed to be a vascular disorder caused by constriction followed by sudden dilation of arteries in the head, neck or scalp. Other theories include metabolic disturbances or abnormal release of neuro-chemicals in the brain such as serotonin or noradrenalin or high levels of ammonia, histamine, etc in blood.
The frequency and intensity of headache is maximum during childhood and reduces gradually as the patient ages. Women are more likely to be affected than men.
According to ayurveda, if a person’s lifestyle and diet includes trigger factors, especially when his/ her general health is not so good then the vata dosha increases in the patient’s body. This vitiated vata dosha with or without kapha dosha constricts or compresses blood vessels in the neck, eyebrows, scalp, ear and eyes and causes intense pain. If the disease is severe and uncontrolled it could lead to permanent damage to vision and hearing. 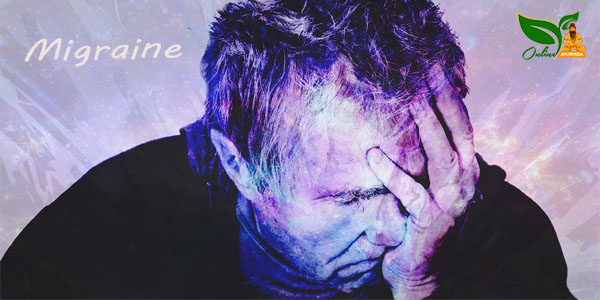 The following factors prevent migraine when used in synergy:

A careful history and the patient’s own experience will help the physician to guide the patient in avoiding certain foodstuffs, spreading workload and facing tension in a relaxed manner. If the patient is on any medications, which are known to precipitate attacks, then change or reduce the dosage of those medications.

In between the attacks effort should be made to rectify digestion and bowel habits. Panchakarma or methods to detoxify the body should be employed. Virechana or purgation is remarkably helpful in such conditions. Virechana along with basti (i.e., administration of medicated oil/ decoctions via rectal route) help to achieve equilibrium of vata dosha.

However, these are to be carried out only by a qualified ayurvedic physician. On the other hand patient can self-administer drugs like isabgol/ triphala churna to regularize bowel movements.

Nasya is a type of panchakarma in which medicines are administered through nasal route. Nasya is particularly helpful in disorders affecting the organs above shoulder region. Shadabindu tailam nasya is helpful in migraine. After massaging the forehead, sinususes and nose and giving fomentation to the said areas three drops of shadabindu tailam are to be administered in each nostril of the patient.

While doing this care should be taken that the head is slightly lower than the shoulder region when the person is in recumbent position. The dosage can be increased to 6 drops in each nostril after noting the patient’s responses.

Last but definitely not the least is the diet. It should be nutritious and easy to digest. You may include sweets made from milk and home made ghee in the diet. Grains used for making rice and bread or chapattis should be at least a year old.

Preparation made out of the leaves of drumstick can be included in the diet. Fruits like Indian gooseberry (amla), pomegranate, etc. are helpful in reducing acidity and hence are helpful in patients who are prone to hyperacidity. Snake-gourd, coconut, green gram, gingelly oil, buttermilk, bitter gourd are also helpful.

Migraine can range from just a nagging mild headache to a severe form, which hampers a person’s day-to-day activities. Its seldom manifests as a permanent damaging disorder however; efforts should be made to prevent the same. Following the above-mentioned routine, a person can lead a normal life free from migraine attacks.